Overnight in the Desert

Yes!!! After 18 months in Saudi, we caved in and bought camping gear after hitting several camping stores (Olayan on Kurais road and Saco World at exit 5). We left with lighter wallets and a heavier truck, full of a tent, 4 cots, 4 sleeping bags, a Saudi desert carpet, 4 foldable chairs and even a collapsible toilet seat! This sudden purchase of camping gear was prompted by two things: a desire to overnight in the desert AND the fact that starting in August, we will be in Malawi and will be able to camp and do safari in the African Savannah.


It’s amazing all the stuff we could have bought. We did not buy everything we needed and will need to check out another camping store later this week.We are missing small rechargeable lights, a table, a small gas stove, better stakes for the tent, but we had plenty enough to have a good first experience and were fortunate to camp with six other families who were experienced campers and had all the equipment that they willingly shared. 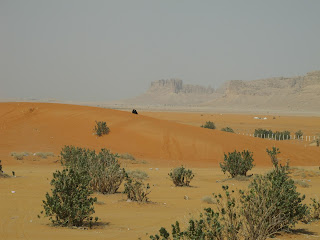 We all met in the parking lot of a supermarket and, after discussing the route, we caravanned into the desert. It was quite a scenic drive, taking us down the plateau, by small escarpments and into never before seen corners of the Kingdom. Although we walk in the desert on a regular basis, it’s usually within one hour drive from Riyadh. This weekend, our destination was over 200 kms from town and really took us off the beaten paths and away from the crowds. The further away from Riyadh the less cars we crossed on the roads until we left the roads and went into the desert. 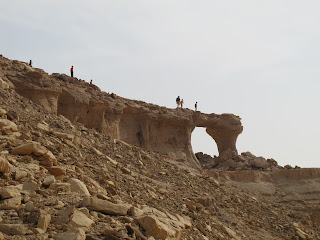 Our first stop was by an escarpment featuring a beautiful natural arch. This was the perfect spot to enjoy our picnic lunch and follow with a climb up all the way to the arch. In his haste to climb, Alex even forgot to change shoes and ended up climbing in his flip-flops!!! Not the smartest move of the day, but he pulled through and by the time I noticed the missing shoes, he was already on his way down. The view from up there was breathtaking of the surroundings up to 20 kms…
After that, we went to our camp site. All cars were 4x4, except for ours, which hadn’t posed a problem on rocky trails… Once we hit some sandy trails, it became obvious that a 4x4 vehicle would have been better suited. We used the Saudi trick and deflated our tires which enabled us to push on. Of course, one of the guys had an air pump, which we used on the way back to reinflate the tires before hitting the black top again.
In the desert, we encountered several herds of camels and their shepards in their trusty Toyota trucks. They all waved and wished us welcome to their desert. Later, after dark, we even had one who dropped by our campsite and extended an invitation to lunch, which we politely declined. This kind of hospitality is straight from the heart and is part of the Code of the Desert. Nowadays, it’s just an invitation, but years ago, desert Bedouins would take in traveling/stranded/lost desert roamers, feed them for a couple of days before wishing them a safe continuation. That was the only way to survive in this harsh desert! 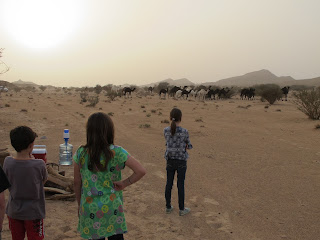 We found the perfect place to camp, a sandy area, with small bushes all around between two escarpments that only called to be climbed. We set up the tents, beds and all camping gear before night fall. Each family had brought stuff to cook dinner, ranging from hot dog, burger, steak and chicken, as well as butternut squash and spicy lentil soups, spaghetti and even a pressure cooker lamb stew! I’m telling you, we were camping in style!
The best part for us parents was that we had 13 kids between the seven cars who all played super well together. They even helped dig a fire pit, find rocks to frame it and wood to feed the fire. They spent the evening running around the camp site, playing hide and seek, roasting marshmallows and just having plain old fun around the campfire!
The starlit sky was amazingly clear and beautiful and the setting of the camp was very peaceful. Not a sound, expect the ones we produced, could be heard. Move 500 meters from the site and you could truly enjoy the silence. The moon cast enough light to create shadows, outlining the desertscape with stunning shadows.
The sleeping quarters were very well appointed, with each of us on our own cot, in a sleeping bag and wrapped in big blankets for warmth, as desert nights at this time of year still can be chilly. We were awaken around 3:00 am by sudden gusts of winds that kept on until dawn, at which time we all were awake and ready to eat breakfast, ranging from croissant au chocolat, crepes, breakfast burritos and crepes. 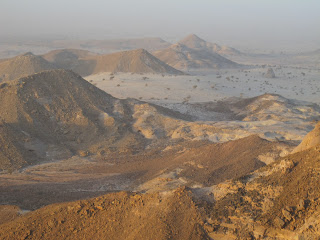 Before leaving, a group of guys went up one of the tallest “peaks” of the area while a group of children went up another tall hill. They all did great and came back mostly unscathed. We folded the campsite and vacated it, leaving behind only footprints. Within 30 minutes of us hitting the blacktop road back to Riyadh, we were caught in a sandstorm which would have made it really difficult to get out of the desert. Good thing we did decide to head back when we did.

When can we go camping again? This was so much fun!
Posted by Unknown at 8:20 PM