A few months ago, on a flight back from Egypt, I picked up a magazine featuring Ushaiger, a traditional Saudi village having been restored to its former glory, as a way to preserve its heritage and displau relics and pieces from the village in their newly built museum. The photos were so appealing that I kept the article and just found it yesterday. So, since we are all off this week for Spring break, we decided to pack the car, bring our picnic and head to Ushaiger. 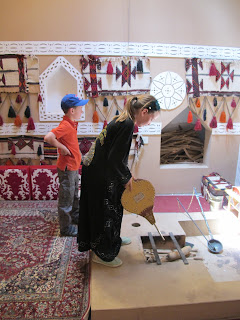 A little internet research was necessary though, as we really had no clue where this beautiful spot was. Here are the coordinates 25°20′33″N 45°11′0″E. From Riyadh, count on over 200 kms each way of easy highway. Take Mekkah Road, pass the first checkpoint, go down the escarpment and turn right at the first exit, direction Shaqra (Highway 505). Drive on that highway for a good long while. When you reach the second town, at the roundabout, turn right and continue for 35 kms. At the next roundabout, go straight for 18 kms and, at km 18, you will see the new town of Ushaiger. Turn right on that road, drive to the end of it and you will be able to spot the old traditional village. 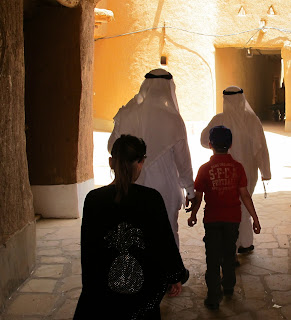 So, according to Wikipedia, “ Ushaiger is one of the oldest towns in the Saudi region of Najd and was a major stopping point for pilgrims coming from Kuwait, Iraq and Iran to perform Hajj or Umrah. It was originally known as A’ekel but the name was eventually changed to Ushaiger. It was changed because the town is bordered by a small mountain north of the Village. The mountain is red in color, yet locals said it was blonde simply because red and blonde were used interchangeably in the old days. Ushaiger means the “Small Blonde”, which is a description of that particular mountain. Historical Ushaiger belongs to the Tamim tribe although other tribes lived there as well. It is also the home land to many families in the Arabian Peninsula. Such families are Al-Elsheikh (The family of Muhammad ibn Abd-al-Wahhab) and Al-Thani (Rulers of the State of Qatar) originated from Ushaiger.” 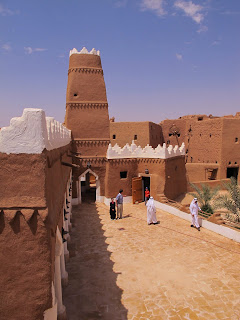 According to me, Ushaiger is what I thought Saudi Arabia would look like. Mud and straw houses, with narrow shaded alleyways, surrounded by defense walls and an oasis. What I was not expecting was the intricate irrigation and water collection systems, with a series of wells connected to each other and providing water for people, living and crops. In many ways, these desert folks knew how precious water was and had engineered a whole system to collect the water…if only today’s generations realized how wasteful their water usage is. We were extremely welcomed in the village, being offered a private tour of the museum, the traditional cup of tea and Arabic coffee (that the boys drank seated in a cosy male only area, while the girls stood around and waited for the boys to be done). Our private guide, an elder whose grandfather used to have a farm in the village, took us around the restored alleys and houses, showed us many wells, his grandfather’s garden with a great irrigation system, still being harvested to this day. He took us to two of the schools in the village and two of the mosqs as well, one outdoors and one still in use. 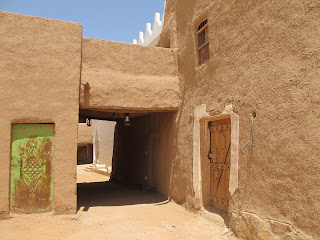 After our tour of the village, we drove up the mountain and had a picnic in a secluded shaded area, overlooking the entire historical village, with its protecting walls, watchtowers and many palm trees. 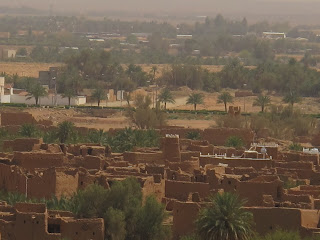 Our guide was very proud of his village and we were very complimentary of its renovation. The feel we had was like walking inside a history book. The only missing elements were the people who used to live in the village…. It was so peaceful and quiet, beautiful and serene, historical and humbling. What a great way to spend the day, going back 400 years in history…
another blog by another expat on same village
Posted by Unknown at 7:04 PM